An Untold Tale Of The Secret Sacred Wars 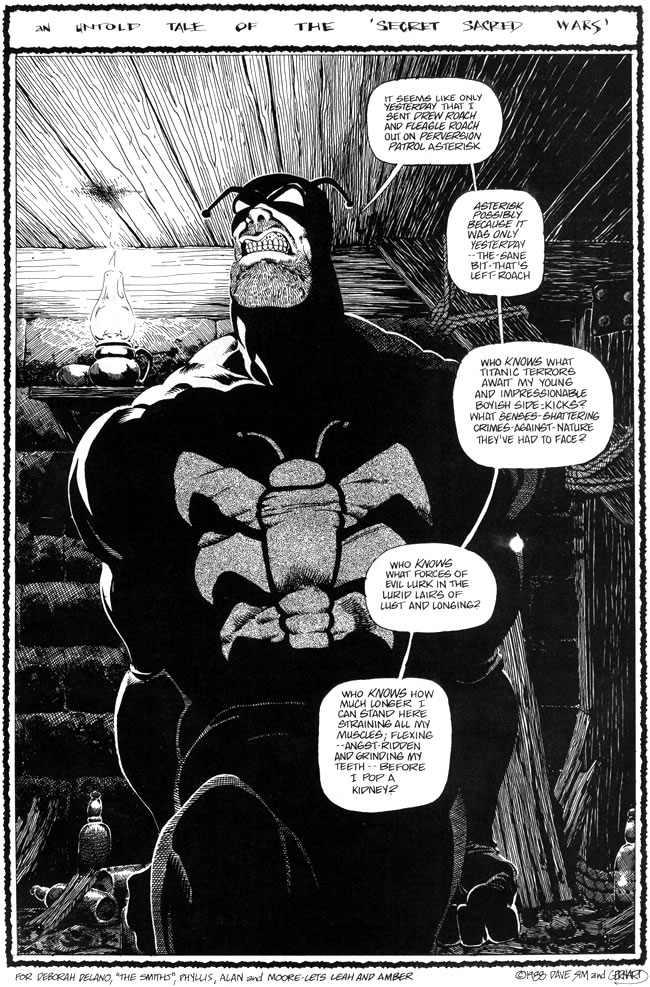 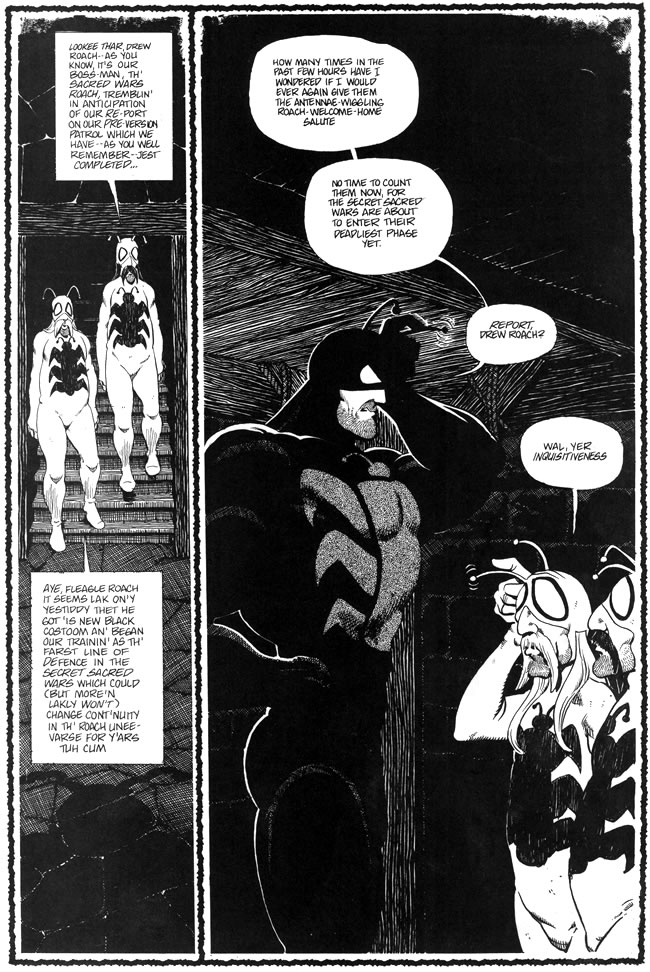 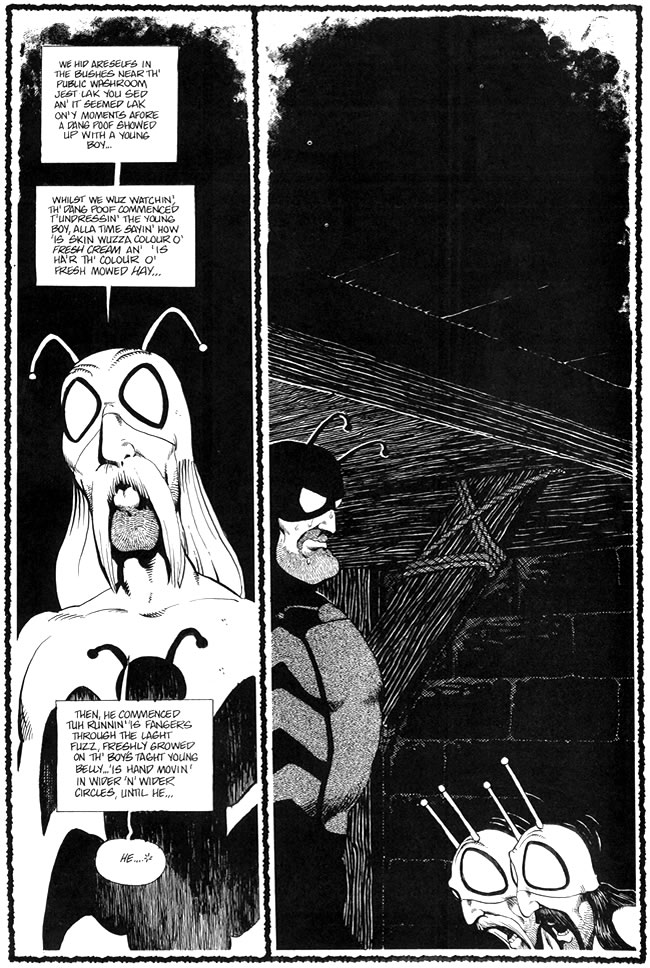 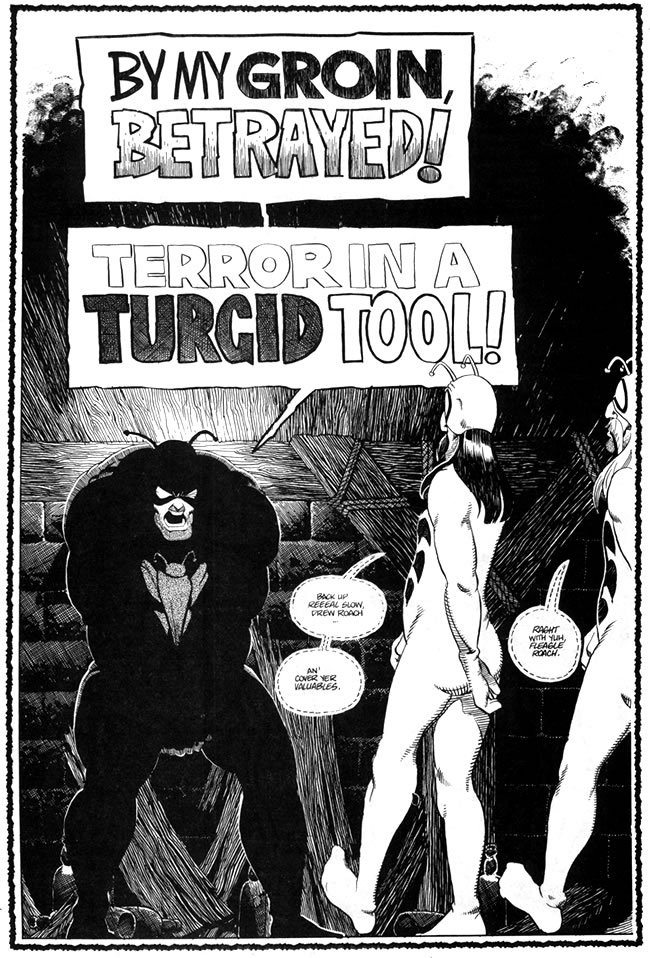 An Untold Tale Of The Secret Sacred Warsby Dave Sim & Gerhard(First appeared in AARGH!, Mad Love Publishing, October 1988)
The following article first appeared in Escape Magazine #15 in 1988. At that time Alan Moore had just set up his publishing company, Mad Love (together with Phyllis Moore and Debbie Delano), and was working on its first release, a 72-page benefit comics-anthology of work donated by the world's top comic creators: AARGH!: Artists Against Rampant Government Homophobia. All the profits from AARGH! were donated to the Organisation For Lesbian And Gay Action to safeguard the legal rights of Gay people persecuted by Section 28 of the Local Government Act. This was a piece of legislation enacted in 1988 by the Thatcher Government which stated that a local government authority "shall not intentionally promote homosexuality or publish material with the intention of promoting homosexuality" or "promote the teaching in any maintained school of the acceptability of homosexuality as a pretended family relationship."

NO MORE SEXby Alan Moore
Firstly, forget God. If God exists, it's unlikely that SpaceTime's creator worries about our love-lives. A God who'd forego super novas to catch Sol III's microbes having oral sex is just plain creepy, and has no place in this discussion. Neither do our Jimmy Swaggarts, claiming to represent the deity between visits to the knocking shop. While discussing human desire, let's ignore superhumans and subhumans.
Secondly, forget 'unnatural' sex. Most natural creatures, excluding a few Presbyterian termites, will hump anything within reach if inclined, ignoring gender, species and family relationship. Lacking a hunky tom within pheromone-range, Tabby will back onto your winklepickers without embarrassment. Besides, since when does humanity do things naturally? Camels don't wear polyester slacks. Amoebas know nothing of Shake'n'Vac. Every other human enterprise flaunts nature, so why is sex special?
Because it’s powerful. Along with death, it's life's propelling force. Control sex and death, and controlling populations becomes simple. Death's easily subjugated: William Burroughs observed that anyone who can lift a frying pan owns death. Similarly, those owning most the pans, troops, tanks or warheads own most the death, and can regulate the supply accordingly. Death's a pushover, but how do you control desire?
Well, fear and guilt packaged as religion ought to be good for a few thousand years. When the ideology becomes threadbare, you simply employ more forceful salesmen: Jimmy Swaggart, Jerry Falwell. Sex is also restricted by self-policing family units: building blocks that, if arranged into neat pyramids, form stable societies - providing the blocks are the same size and shape (and colour, preferably). Despite reducing relationships to Lego bricks, it's a serviceable theory. During agricultural times, extended families proved most efficient for running farms and paying tithes. Industrial times demanded different models, producing the nuclear family, small and mobile enough to follow work citywards and inhabit the limited space available. 2.2 children replaced their parents on the production line, and the social engine trundled onwards... until 1956.
In 1956, white collars first outnumbered blue in America's workforce. Western societies entered its post-industrial mode, social structures changing accordingly. The nuclear family gradually collapsed, to be replaced by... the post-nuclear family? Post-nuclear families are flexible. We divorce, remarry, stay single, childless or celibate, living with partners of the same sex, the opposite sex, both, neither. We raise children alone, with partners, in communes, or, increasingly rarely, in traditional nuclear families.
Perceiving this shift towards multiple choice as chaos, many long for simpler bygone times. Their leaders, like all good whores, willingly accommodate these fantasies - Victorian nannies and grizzled cowpokes a specialty. Canute-like, our leaders attempt to reverse society's tides; retreating from the future towards an imaginary past; shoehorning women back into the kitchen, gays into the closet, sex into the marital bedroom. But those things have grown too big. No amount of pushing will get those doors closed again. All we do is crush people.
Sex exceeds politics, right or left (assuming you still differentiate). Mary Whitehouse or Andrea Dworkin may outlaw pornography, but can't stop people wanting it, regardless of legality. Similarly, Section 28 cannot remove the desire for homosexuality. Consenting sex cannot be prevented. There's regrettably little evidence that even un-consenting sex can be curtailed by legislation alone. Perhaps desire is better comprehended than contained? Perhaps sexual openness would mean less morbid longings, festering alone in darkness?
Despite a panic-stricken 'moral' backlash, we progress slowly towards tolerance, understanding. Our sexual turbulence and shattered preconceptions may resolve themselves into a new approach to sex, more various and humane, accepting different loves and lusts without reshaping them into Meccano for our social scaffolding. Sexual awareness rides an upward exponential curve, uncheckable by politicians, popes, police-chiefs. But what of plague?
Is AIDS sufficient to keep the erotic genie in the bottle? Televised health warnings seem increasingly less anti-disease than anti-sex. A youth writhes, unnerved by the ominous soundtrack, while his fishnetted date lounges invitingly. Rather than donning a condom and squelching deliriously till dawn, it's implied that he should go home to sleep with hands above blankets.
Novelists, who should know better, bemoan the inevitability of less sex in fiction. Surely AIDS isn't transmitted by smut? The only virus afflicting literature are viral ideas of censorship, spreading through parliament, press, publishers and public, leading art towards the terminal ward. Obviously this over-reaction doesn’t make AIDS less terrifying. Quite simply, it will decimate us. While experts demand less discrimination to facilitate monitoring the virus, our government responds with Section 28. Remember that Britain is relatively enlightened concerning AIDS, and shudder.
So, no more sex? On screen, between soft covers or especially in reality? I don’t believe it. Sex survived horrific syphilis epidemics, aroused blood rushing from the brian, ensuring sex continues whatever the dangers. We'll die of sex or live with it, but never stop it. Even preventing all physical contact wouldn't prevent sex, which occurs more in minds than mucous membranes. We think about sex approximately every twenty minutes. Lacking physical contact, we’d just think harder. Thermonuclear war would barely slow sex down. Within billennia, cockroaches would rewrite the Kama Sutra.
AIDS may even hasten sexual enlightenment, this sexual crisis mirroring similar crisis in our environment and economies, all forcing a simple, brutal decision: change or die. Change our environmental policies or starve. Change our sexual furtiveness or die, as they say, of ignorance. Up in arms or down in flames, the choice is still ours. Our bodies are ours. No more sex?
Don’t be silly.