From the material reprinted in the Cerebus Archive magazine, you seemed to keep just about every letter or scrap of paper you ever touched. Are you a hoarder by nature or did you have a sense of its importance and that all this stuff was worth keeping at the very start of your career? ...But before you answer that, I thought I'd mention that we have our first news site joining us today for the "march downfield" to the HIGH SOCIETY DIGITAL LAUNCH 10.10.12 -- BLEEDING COOL.  I'm just going through their first batch of questions now for some good ones and I'll be faxing them to you shortly.
Say, that's great Tim!  You know one of the reasons that I don't have Internet at home is that I know if I did I'd be hooked on BLEEDING COOL! Just completely absorbed in watching all the breaking news and trending items on BLEEDING COOL.  BLEEDING COOL really have all the stories that comic fans are looking for, up to the minute, 24/7. Consequently BLEEDING COOL has the best-informed, most intelligent audience of pretty much any news site on the Internet I could think of.  In fact I'm typing this on August 21st and I was just up at the counter buying my coffee here at the coffee shop and there were two average downtown Kitchener businessmen ahead of me in line -- just regular guys with, obviously, a lot of disposable income and right smack in that target demographic everyone is looking to connect with on the Internet these days -- and they were talking about BLEEDING COOL's breaking story of Geoff Johns leaving AQUAMAN and whether it would be trending up or down on the home page. That happens to me so often these days -- people who haven't even touched a comic book in twenty years absolutely immersed in what's happening on BLEEDING COOL -- that I don't even remark on it anymore.

Anyway.  No, I WISH I had been that scrupulous.  There were various points where I just junked whole piles of artwork, letters, stories because I wanted to move mentally past it.  Single pages and cartoons and sketches and I'd think, "No, this isn't it. I'm in love with how it looks but there's no market for it."  Purging files.  I absolutely hate to think of the stuff I would throw away so I could start fresh.  "Just put it -- CAREFULLY -- into a garbage bag and STORE it somewhere."  I hung onto stuff that had gotten published, mostly.  THIS saw print. THIS is okay.  Focus on THIS.  Letters. All of my interviews with Mike Kaluta, BWS, Berni Wrightson, Harvey Kurtzman.  Well, don't need these anymore. Might as well use them to record mixed music tapes.  ARGH.
The Gold Standard is really Milt Caniff's Archive at Ohio State University.  ALL of his fanmail kept chronologically, to the extent that Jules Feiffer could narrow down to a space of a year or so when he had written to Caniff at age 10 (or whatever) and there it was. Jules Feiffer's letter to Milt Caniff. 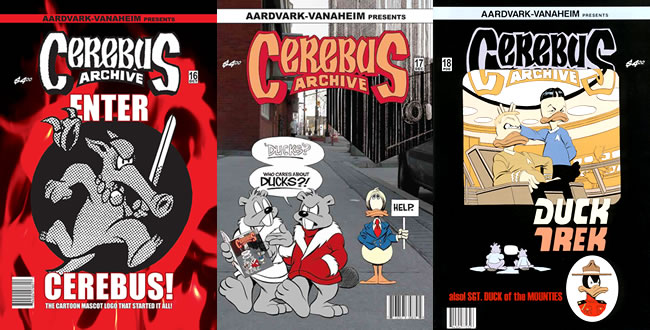 Cerebus Archive #16-18 (October 2011 to February 2012)
Art by Dave SimI don't have the first drawing of Cerebus.  The one on the back cover of CEREBUS No.1, the A-V logo I did for Deni.  No real need to keep track of it.  It's a mascot for a fanzine.  A fanzine isn't taking me where I'm going.  It got me a girlfriend. It served its purpose.  At a specific point, I did start to save a lot more stuff.  But, as an example, I only have the tracing paper drawings I'm selling at Dave Sim Art from the last few years of CEREBUS.  Before that, I just threw them out.  End of the issue clean-up -- "Go in with a flamethrower" Ger and I used to call it.  Same idea.  I need all of this No.134 CRAP out of my way so I can start thinking seriously about No.135.  Bunch bunch bunch. PITCH.
I'd get lazy. There's about ten years of correspondence missing because I'd just handwrite the answers, Karen or Carol or Monique or whoever it was would type the letter and mail it.  "I really should get them to photocopy it and file the copy before they do that."  If you've got Dave Sim letters, please send photocopies of them in -- particularly from 1988 to 1996 or so.  After CEREBUS was done, I kept all of the letters in comic magazine boxes.  Letters, photocopies of my answers and whatever it was that came with the letter.  Boxes and boxes.
Kept EVERY scrap of glamourpuss pretty much.  Done with it? I'd have a magazine box standing on its end and just put every proof, every sketch, every stat in it.  Two long boxes over four years. It doesn't take up that much room and THERE's the only chronological record.

Tomorrow's question? Why, its right here:

Since finishing Cerebus, you have done some work with other creators, even occasionally scripting for others (e.g. the issue of Gun Fu you co-wrote), something you'd done early on but, except for with Gerhard, rarely have done since that partnership formed.  How do you find it to have to script for another artist, or to accomodate your style to someone else's work?