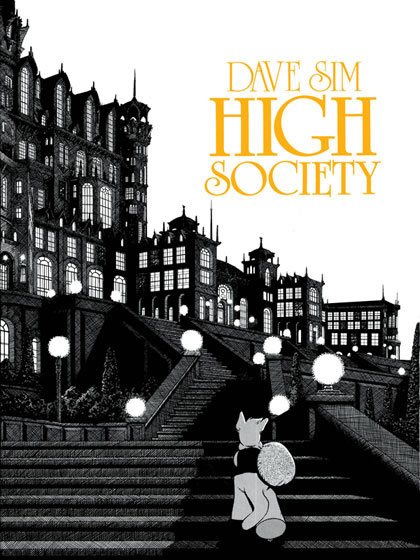 High Society: 30th Anniversary Signed/Numbered Gold Edition. On sale October 2012.
Pre-order now from Page 45 by 20 August to reserve your copy,
or ask at your local comics store.STEPHEN HOLLAND: (Stephen Holland is the co-founder/owner of Page 45, one of the UK's best comic stores)
A single story told in 25 chapters with a beginning, a middle and an end.
One of our rationales for recommending this book as your introduction to Cerebus is that if you can trust Dave Sim to tell a story with a beginning, middle and end over 25 issues - and you can - you'll be able to trust that he can do the same over 300 of them. It's also very, very funny.
It's a cross between Blackadder and Yes, Prime Minister, making mockery not just of politics, but of exchange rates: the very idea that you can make money from having money and just swapping its currency. Lord Julius is back, and the extraordinary thing about Sim's treatment is that he looks and sounds precisely like Groucho Marx. You can hear him in your head, and the already impressive wit/actor/iconoclast is given a delirious script eminently worthy of him. Cerebus, previously little more than a mercenary thug and barbarian, finds himself so much in demand amongst High Society that they elect him as their candidate for Prime Minister. His opponent? Lord Julius' goat. Not an anthropomorphic goat, but an actual goat. It's a surprisingly close-run contest until you recall that America did actually elect both Ronald Reagan and George W. Bush - the second time, anyway.
Also: Jaka returns in a heart-rending scene during which you will learn the difference between inference and implication; after which you will quote Dave Sim on the subject for the rest of your newly pedantic life.
By this point Sim's skills as a sequential artist have already reached what would be most others' pinnacle, but he's only just begun. For example there are sequences in which Cerebus is drunk and so, reflecting that, the pages need to be tilted 90 degrees successively. It's also relatively rare to be able to emulate other styles and incorporate them successfully into your own comics (Mark Buckingham's particularly good at that - see Neil Gaiman's Death: The High Price Of Living: most readers think Chris Bachalo drew the whole thing), but in using his own Roach character to parody Bill Sienkiewicz's run on Marvel's Moon Knight, he pulls off an exceptional impersonation of a Bill Sienkiewicz then in thrall to Neal Adams' neo-classical photo-realism.
Note: you don't have to have a clue about the contents of that last sentence to enjoy the book in its own right. Over 1,000 copies of Cerebus: High Society have been rung through a till either here or at the last shop Mark and I worked for. Each has been done so with a money-back guarantee. I have had one copy returned in twenty years.