Smoke Gets In Your Eyes!!!

My little helper.  I picked up several new plants at Home Depot to replace those who died a horrible Roundup death.  Unfortunately, this time of year is not good for plant selection.  I ended up with some society garlic and two ground cover roses.

I can never go in the back yard without my little shadow following me with his (don't say it out loud) B  A  L  L .   He thinks rolling it into the hole I've just dug is the bees knees!!  He even helped make a couple of holes when I didn't return it fast enough.  THAT necessitated the dreaded Paw Wash ... being held over the sink while the paws get scrubbed.  Not his favorite game at ALL!! 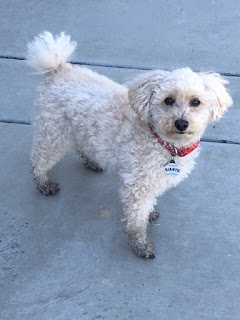 With half the work done, I tackled the overgrown lavender and rosemary.  I think my hands will smell of rosemary forever.  I can't imagine how these got so BIG, when everything else around them was dying from lack of water.  NOT!!  As much as the young son gardner didn't want to listen, I told him about pride of workmanship.  If he'd take those stupid earphones out of his ears, he might just pay a little more attention to his work!! 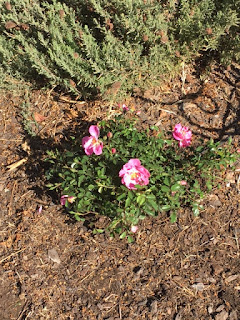 Four more plants found a spot, as I promised they would have a good home.  I almost crossed my fingers, since I know my gardeners well.  Cooper of course, helped down to the last scoop of dirt, which he pushed in with his nose.  TWO dreaded Paw Baths in ONE day!! 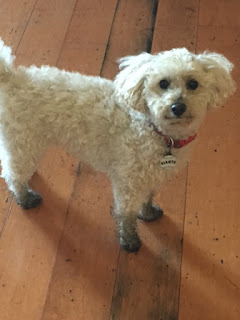 With lots of time left, I wandered over to Hunter Farms Pumpkin Patch, just a half mile away.  It happens that Prince Charming from the Magic Kingdom owns this endeavor, which he says is his biggest investment returning the smallest of capital, which doesn't even cover the electricity bill.  I'll have pictures for you tomorrow!  Being the ultimate professional photographer that I am, I forgot to charge the battery.
In the meantime, I'm setting up my Halloween Trick or Treat front door. 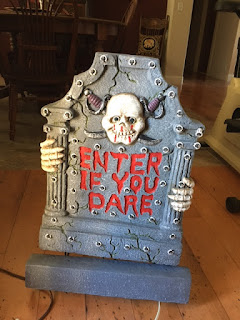 The problem is they all require electricity.  Running cords under the front door will only work if I take the kick plate off.  No problem!!  I'm hoping spiders and bugs don't crawl underneath.  That would be a Halloween surprise I don't want to encounter!! 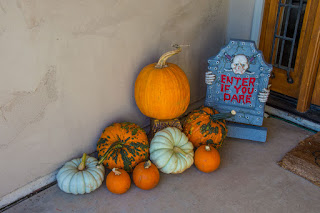 Did I mention I found my fog machine?  Now THIS is going to be fun!  I cleaned it up, put in fresh liquid and let it heat up.   Once the green light comes on, you can hit the switch with your foot, making clouds of smoke come out .... SPOOKY!!   Cough cough ... ARGH!!!  Don't stand over it when you do that!!  My eyes and nose filled with smoke.  Not that's it's dangerous, it's just friendly water vapor, but a good dose in the face isn't the smartest idea!  I played with it for ten minutes, hoping the neighbors didn't think my house was on fire. 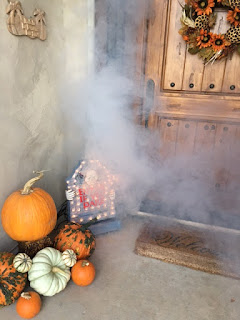 As long as I'm dragging stuff out of the garage, I heard the Butler complain that he had been locked up for years.  When you walk by, he talks, his eyes light up and his head turns.  He's a little old and stiff (like all of us) and he clicks when he turns his head, but will be the perfect addition to my porch. 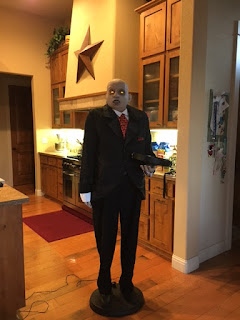 I drug him over to the front door.  (It's actually very dark now ... I lightened this picture so you could see).  The first thing I did was turn my back and open the door.  When I looked back inside, I scared the heck out of myself!!  WHAT????  Oh good grief!!  From that point on, Cooper (my little protector) wouldn't leave him alone.  He barked for the next hour, no matter what I did. 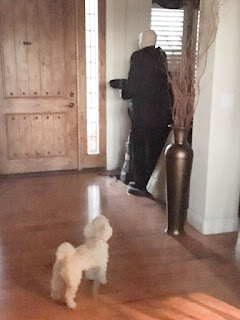 We're just not used to having company in the house!!  I have to consciously think about him or I scare myself in the early mornings too.  What a scaredy cat!!
I'll pick up a few more pumpkins today to camouflage all the extension cords, as well as some supplies to make the fog colder so it stays closer to the ground.  Yup ... I watched a Spooktacular about how to set up a fright house!!  Really, I don't want to scare the little kids ... it's just for ambience as I hand out FULL SIZE snickers bars!!  TRICK OR TREAT!!