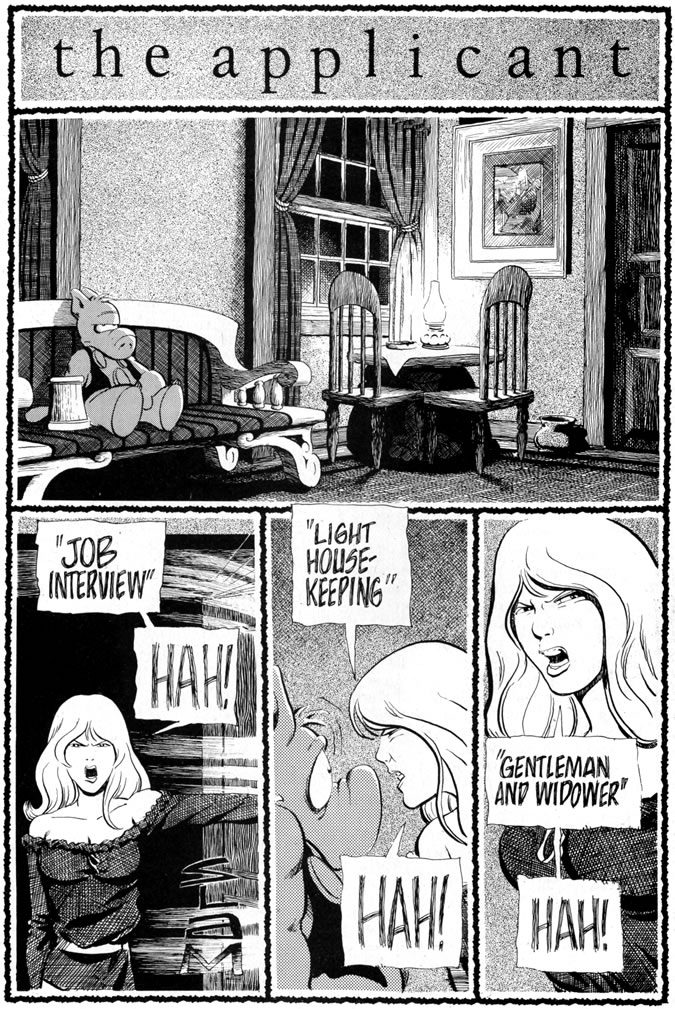 DAVE SIM:
(from Cerebus #91, October 1986)
So having grown weary of being asked "When is Jam #2 coming out?", I've decided to cancel the book and just print the stories as they are completed. Since Colleen Doran's has been done for many months now, hers is first. I'm now going to get asked "When's the next Cerebus Jam back-up coming out?", but at least its a different question.
The Applicant is based on a conversation Colleen and I had after she had had dinner with Jo Duffy and a certifiably-vile-and-lecherous-New-York-City-editor-for-one-of-the-Big-Two-who-shall-be-although-hanging's-too-good-for-him-nameless.
I've made it into a giggle here, but that in no way diminished the fact that there are a lot of major sleazeballs in this business running around loose with "Myth of the Heroic Rapist" videos playing in their heads.
I admit I thought Colleen was over-reacting and/or exaggerating (I'm not exactly Alan Alda or Phil Donahue), but having talked to a number  of female-type professionals, the practise is wide-spread enough to cause concern. I recommend at conventions when young girls are showing me their portfolios that they recognise the dangers that they face. Keep all contact with editorial/art director/publisher types strictly public i.e. you don't want to go to his room/go to the bar/go for dinner to talk about any projects. Stay at the site of the convention. If you're there with friends, keep them with you at all times when asking someone to critique your work. Be aware of how good your stuff is and if someone starts talking like you're the next Al Williamson, take it with a grain of salt.
Which sounds like the perfect solution, until you realise that Colleen was with Jo Duffy and should have been safe. "Power corrupts..." and all that. Like I say, I'm no Alan Alda, but "no" for an answer means "no" - not "maybe" or "let's wrestle" or "yes, but you have to beat me two falls out of three."
It bothers me that it is enough of an issue that instead of saying what a joy it was to ink Colleen's work that I had to go all political here. I know the subject is important enough to Colleen that she will understand, but I wish it wasn't necessary.
It's rape and sexual assault under the law. Period. And no one is exempt, no matter their position of authority. No one. Instant Karma's going to get you guys, so knock it off.

THE COMICS JOURNAL:
(from Two Sides Of Julie The Ladies' Man by Michael Dean, The Comics Journal #259, April 2004)
A year and a half before his death, according to Doran, Schwartz sent a note of apology to her agent, Spencer Brook, saying "I don't know what I was thinking. I made a mistake." ...Schwartz's dinner with Doran and Duffy was reported once before as a fictionalised comics story by Dave Sim called The Applicant, which appeared in Cerebus #91 in 1986 accompanied by a brief intro essay by Sim. According to Doran, when word leaked that a comics adaptation of her experience was going to appear, her publisher received calls from three different comics professionals, each of whom thought the story was about himself and demanded it be dropped. None were Julie Schwartz.

Colleen Doran is the writer/artist of the fantasy series A Distant Soil and illustrator of many other comics and graphic novels. Julie Schwartz (1915-2004) was long-time editor at DC Comics, where he was primary editor over the company's flagship superheroes, Superman and Batman. He was inducted into the comics industry's Jack Kirby Hall of Fame in 1996 and the Will Eisner Comic Book Hall of Fame in 1997.