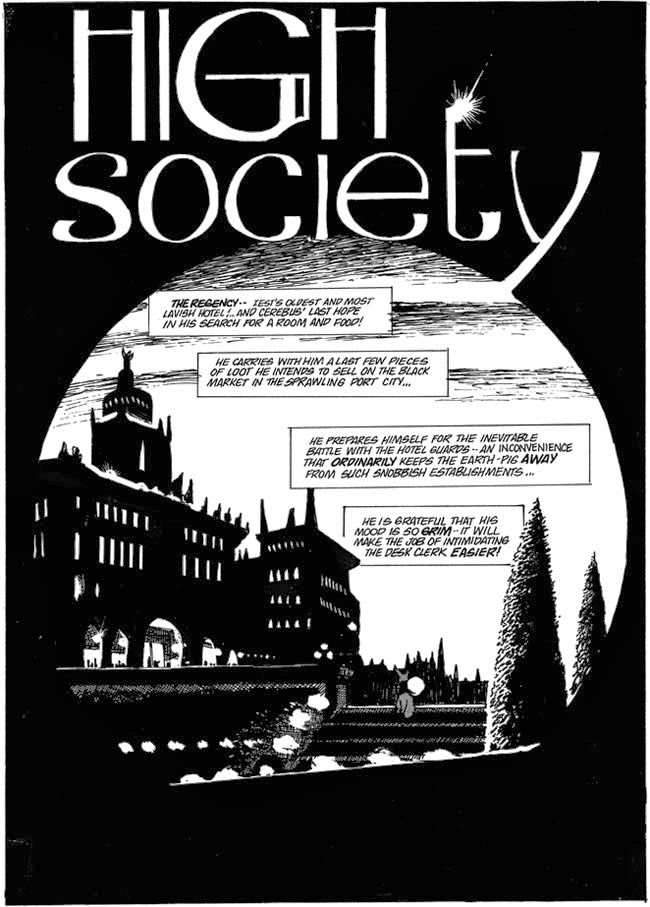 Cerebus #26 (May 1981)
Art by Dave Sim DAVE SIM:
(from The Beguiling, 2004)
Iest's Regency Hotel… was modeled on the Chateau Laurier in Ottawa, a stately Victorian-era hotel which is so fully integrated into the architecture of the Parliament Buildings which it adjoins that it might as well be a part of them. A uniquely Canadian quirk. It would be hard to imagine a luxury hotel abutting the U.S. Senate or Westminster. When I stayed there (as a guest of an Ottawa convention) I had to pass through several sets of doors to reach my room and my imagination took flight on the idea that your measure was taken by the desk clerk and your place in the pecking order was established by the number of doors you had to pass through to get to your room. The more doors you passed through, the lower your ranking. At some point I ran across a rather large Canadian coat of arms (which is flanked by a lion and a unicorn) and a further flight of imagination speculated that the hotel was divided into a Lion Wing (for politicians, bankers, royalty - at the time, the hotel restaurant the Canadian Grill Room was an unofficial Liberal party headquarters) and a Unicorn Wing (for artists, musicians, poets and so on). When it came time to apply this to Cerebus it seemed more fruitful to make the division between politics and religion and to apply it to the entire Upper City of Iest instead of just the hotel.